We've all had them--those projects that you began with a gauge swatch, followed the pattern to the letter, were monogamous (no little side affairs with a sock or scarf), used your very best tools, pet and cooed at the project every day and . . .

Is it in the button spacing? No. I think that turned out well. 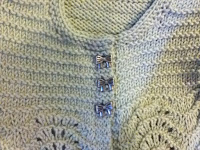 Or how about the lace pattern. Uh uh. Looks A-OK to me. 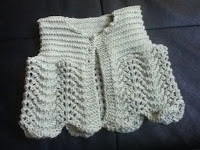 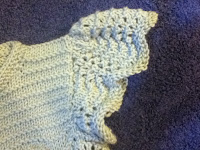 Sleeve #2 - Oh, I like this. But hold the phone. Something is different. 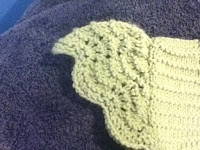 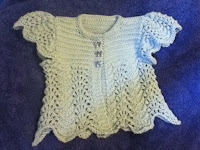 Sleeve #1 looks like it's been Super Sized. Looks like a lampshade. I thought I was done with this project and was so ready to move on to the next one (something for me). But, since the intended recipient is due in the next couple of weeks -- and her mama looks like she's ready NOW -- I guess I'll be ripping out this sleeve and re knitting. Have I told y'all how much I HATE DO OVERS!!! It will be worth it to get it right though. Especially since this is done in Debbie Bliss Baby Cashmerino and is heaven to work with.

P.S. Yes, I know the body looks a little woppy-jawed, but it's the way I laid out the sweater. I was just too lazy to retake the photo.

You are too funny!

I was thinking maybe you forgot to change needles after you cast on. It says to cast on with a size 6 needles, and then change to a size 2 or 3. On mine I went from Size 6 cast on needle to size 3.

Everything I ever made is a woppy, but I love knitting so I just plain don't care.

I say it's cute as a button anyways!
When you figure out how to knit with no mistakes holler at me, okay? *giggles*