Sometimes, life just stinks. This has been, and still is, a hard year for so many people I know:

My heart is heavy this morning thinking and praying about my friends and their loved ones who are suffering right along with them. I know that God has a plan and that he works all things for good, but I don't have to like the process.

But, in the next moment, I realize all the ways in which He has blessed me -- family, friends, work, faith, shelter, food, health. Who am I to question or pout about His plans? Who am I? One of His children living in this fallen world. He understands.
at 7:34 AM 2 comments:

Has anyone ever had this happen? Daughter#2 was playing an on-line game that froze up. After Hub rebooted, the display on the monitor had rotated to the left by 90 degrees -- make reading and especially mousing a little tough. Since I'm the official IT gal at my house (scary thought), if became my job to get this fixed. I tried everything but to no avail. Finally, I mastered the skill of mousing on a sideways screen and did a Google search. Here's what I found out:

It's a Windows feature that was apparently designed for tablet laptops. BUT, on a regular keyboard, you can apparently accidentally hit one of these sequences when you try to Ctrl-Alt-Del. How crazy is that?
at 8:50 AM 2 comments:

It's so hard to believe that July is over and it's time for the kids to go back to school. Where did the summer go? Last night, I took the girls out for school supply shopping. Today starts the beginning of Tennessee's Sales Tax Holiday weekend for clothing and back to school items, but I decided that whatever $ I might save, would NOT be worth the pain and suffering. Can you imagine how crazy the stores are going to be. As of last night, there were already items on our list that were hard to find or not found at all.
I have done quite a bit of knitting this last month. I'm still working on the After Dark Robe from Mason Dixon in an emerald green bamboo. It feels WONDERFUL, but it's a slow go. I've finished most of the back and am working on the seed stitch border for the neck. 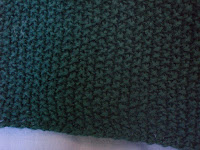 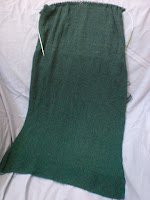 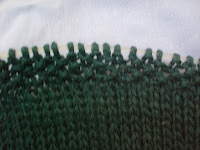 I made a tank top for myself out of Royal Bamboo in a nice colorway of ocean blues. I've frogged the neck and shoulders a couple of times and decided to lengthen the shoulder straps. Boy was that a mistake. I have heard that bamboo tends to "grow" but this is crazy! I'm going to have to frog the neck and shoulders again and go back to the original pattern measurements. 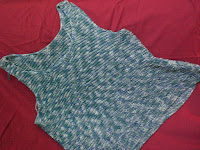 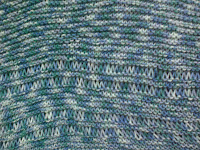 My bud, Liana, has inspired me to try a baby sweater. She's always making the cutest little baby items - bonnets, sweaters, stuffed animals. Me? I seem to pick out projects that take a lifetime to get through. But, back on topic, this little sweater is my first foray into fair isle. It is a VERY simple border around the bottom and the sleeves. I think it's going to be just a little cutie pie. 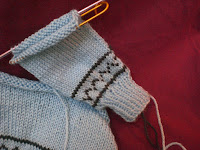 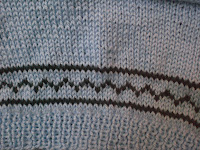 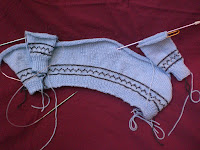 Liana finished her Clapotis, which, I must say, is very impressive. She has already gotten so much use out of The Clap, as she likes to call it :) that I think I may have to try something similar. She uses hers as a wrap. I'm thinking of something in black with maybe some varying widths of dropped stitch rows. Mine is still forming in my head, but, once again, thanks Liana for the inspiration!
at 6:29 AM 3 comments: