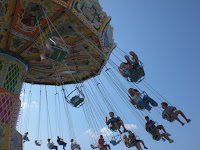 August 16 marked our annual pilgrimage to Lebanon, TN for the Wilson County Fair. This year, our oldest TN friends, The U Family, met us there for lots of fun, sweat, motion-sickness, fried food, and lightening of wallets to win stuffed animals for all our kids. A great time was had by all, but all were exhausted -- all except Daughter #1, who could whoop the Energizer Bunny on his best day. 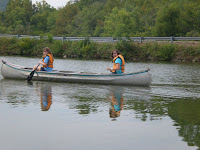 We also managed to squeeze in a weekend at Girl Scout camp. Here's Daughter #2's and friend's maiden voyage in their canoe. Great job, girls!

And now we witness a camel refilling her hump having scrambled up the TN version of Mt. Everest along with the mountain goat (er . . . I mean Girl Scout) troop. Camels weren't meant for mountainous terrain. Give me the desert anytime! 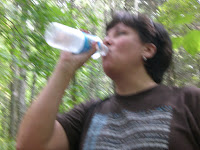 After a fun-filled weekend, we bid adieu to GS camp and headed home. You will notice that my knitting bag made the journey with us. That's it posing prettily in pink. 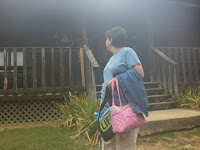 Did I mention knitting? Yes, I have been slogging along on the After Dark Robe in emerald green bamboo. I finished the back, but I won't bore you with photos, since it's just one long rectangle at this point. But I have . . .

finished the Fair Isle Baby Sweater, except for sewing on buttons: 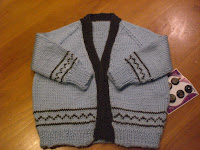 And I've begun another Moderne Log Cabin blanket for Daughter #2 with her choice of colors - turquoise, lime green, and purple. This is the project that stowed away in my pink bag at GS camp. The colors don't come through very well in these pictures. I'll try to post more later after I've tried different lighting. 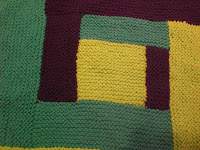 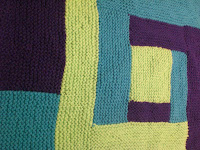 Here's Daughter #2 trying to break my fingers at the park. Ain't she just the sweetest little thang? 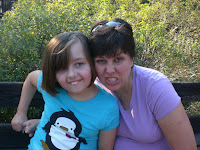 Finally, Daughter #1 was trying to hold down lunch all the while saying "Faster, Daddy, faster!". 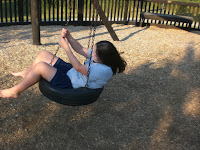 Ahhhhh the fair, the food, food, food oh I think I may have said that a few times. There is nothing like some good fried fair food. I'll pass on the rides though.

You're a winner! Go check it out at my blog, please. I'll send your prize as soon as I hear from you. Please include your snail mail addy. Thanks!
foothillsgsm at yahoo dot com