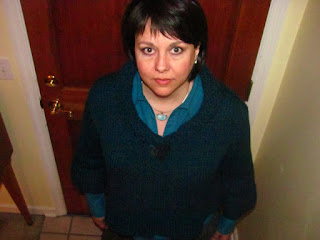 So I finally finished my Nimbus made from Berroco Peruvia Quick. It's squishy, soft, cozy and warm. Just what I needed on a 60+ degree day. (not!) But, it made me smile. 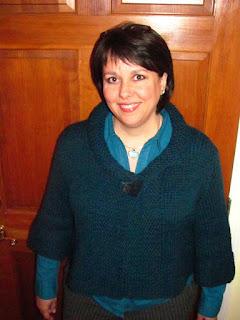 The knitting and seaming has actually been done for a couple of weeks but it wanted for the perfect button. I found it at a fav LYS - Haus of Yarn. The right button makes all the difference, doesn't it? 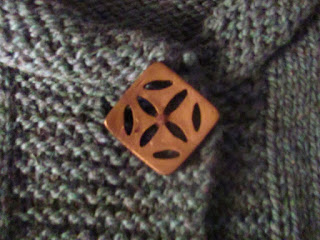 After complaining last week of the snow and ice (and having to abandon my car in the dreaded white mess) I will NOT gripe about the weather being too warm to wear my finished project. I'll just give it a hug now and then...and I can always turn the air conditioner way down and wear it anyway. 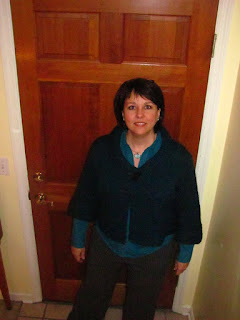 Who Says Chivalry Is Dead?

It's alive and well out here in the sticks (Kingston Springs). Nashville and the surrounding areas had a snow "event" this afternoon. My husband called me at work around 3:00 to tell me things were getting pretty bad at our house, which is 30 miles west of downtown. At 3:30 I was on the road home. I knew it was going to be slow going when the interstate was snow-covered. I did NOT know that it would take me 2 hours to get to my exit and another hour to travel the 10 miles home.

A couple of roads were closed and I had to leave my car about 4 miles from the house. I bundled up, filled up a bag with all the stuff in my car that I might need, and started walking. A little way down the road, a nice man in a 4-wheel drive pickup stopped and asked if he could give me a lift. He was on his way to get his wife and then on to rescue a buddy. I hopped in and asked if he could give me a ride just to the top of THE HILL. I've lived here for 20 years now and I know when THE HILL is passable and when it is not. THE HILL has claimed many victims over hte years and it is not to be toyed with. My Good Samaritan didn't want me to walk from the top of THE HILL so he insisted that he was going to take me all the way home. He also told me he was gonna teach me how to drive down a slippery hill. (insert smirk here -- He obviously doesn't know THE HILL like I do) I asked him several times to just let me out at the top. I told him that I would feel just awful if he got stuck when he still needed to go get his wife and friend. My protests went unheeded...

I'll just say that, once he stopped sliding sideways down THE HILL, got turned back around, avoided sliding into another truck already claimed by THE HILL and was able to slip and slide back up THE HILL (with much praying done on my part), he was more than happy to let me out at the top of THE HILL and bid me farewell.